Posted on December 21, 2011 by Imnotgoing Sideways

So… Know much about moving?  Like, into a new house or apartment?  At first the place feels strange and empty.  Cardboard boxes all around.  You haven’t put anything on the walls yet.  Just a bit of a scatter of furniture strewn about. (o.o)

Well… Day by day, week by week, the place gradually becomes ‘home’.  Little things start finding their place.  The chairs go here, the throw rug goes there, and so on.  The place starts to become an extension of you. (^_^)

Well, I just noticed, pretty much the same thing applies in a SL home.. (O.o)

When I got my sim, I took a lot out to the side and set it to my personal/alt group.  Got a friend to provide a house I could plant there.  Then I left it be for a while.  I spent much of my time in my hilltop cave/thing. (^_^)

But, if I got furniture, I’d place it in the house.  Or, if something crossed my fancy, I’d add it to the place.  In the end…. 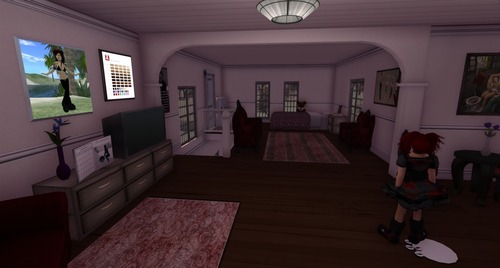 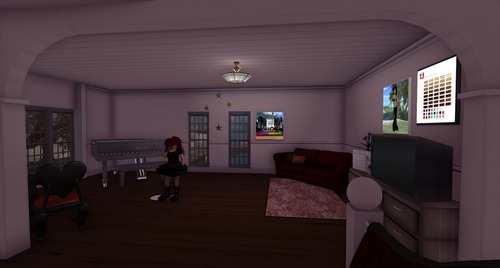 And the other direction for measure. (^_^)

… And I look around the room.  The TV and drawers were simple low-prim things to just fill space while it was still empty.  The pictures were mostly carry overs from my old cookie Jar basement (Which still happens to be there). (^_^)

But, then I look at the things which came with time.  The piano was a gift from a forum friend who wanted to congratulate and reward me for seeking help.  The calendar, which just so happens to be on its final month, is the Second Citizen pinup.  Made 2 years ago with the half-joking doubt that SL would last so long.  I was in August 2011.  There were flowers I’d pick up now and then.  The teddy bear.  A gift for donating L$ to the Japan Tsunami charity.  All things gathered, day by day, as I essentially called this place ‘home’. (^_^)

Downstairs I have photography and art from friends of mine.  It’s their own original work.  And I could keep going without even hitting my prim limit just yet. (o.o)

I'm a Second Life avatar with my own cookie jar! (^_^)y
View all posts by Imnotgoing Sideways →
This entry was posted in Uncategorized and tagged (^_^), Blablablabla, does this thong make my butt look fat?, Friends, I wan to mayk da seks!, Second Life, virtually at home. Bookmark the permalink.