I always do best when I think I’m actually solving a problem.  (^_^)

Though, that’s why I sucked so badly at school.  All the junk they taught there was solved already.  Otherwise, they wouldn’t be teaching it, would they? (O.o)

When new things come out, I like to play with them.  Lately, I been excited by lag reducing script functions and other graphical trinkets given to play with. (^_^)

So, when we got the LinkedParamsFast thing, I dove in head first to make a menu based prim shrinker and later a resizer.  It was nice to see the script become quickly popular with friends… Particularly ones that need to downsize stuff with 0.010 prims. DX

Anyway, later on, I’ve had a shoe maker or two ask for permission to use it.  Hey, yeah!  I didn’t expect it to be good enough to sell, so, I let’em have it. XD

This time around, I included a release.  So, nobody really IM’d me… Well… Except for people who bought shoes which included them and messaged me for customer support by accident. XD

Next on up, I had a friend ask me to make a colour HUD for her shoes.  She and I never really considered buying a solution or hitting up a contract scriptor, so, good time for some collab work, no? =^-^= 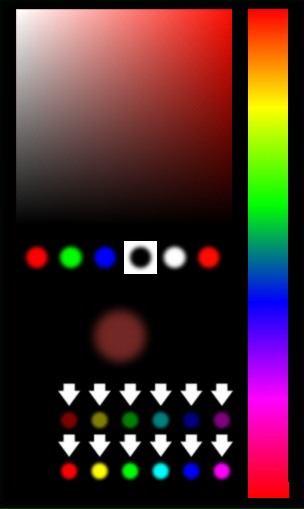 I figured a few features would be reasonable. (^_^)

I’m hoping much of it already makes sense.  The top row lets you set fully saturated red, green, blue, along with solid black and solid white.  The final dot gets whatever hue you’re in and sets it to full Lightness and Saturation.  So, if you want epic yellow… There it is. =^-^=

The memory spots hide a little trick.  The down arrow stores the colour in the space by setting the face colour of the dot below.  So~o~o~o~o… All stored colours will even survive a script reset!! XD

From there I made a LinkedParamsFast colour changer to listen to the HUD and it all worked out in the end. =^-^=

Of course, what’s the use of tooting my own horn without showing stuff off!? (^_^)

Well… My friend finished her shoes! 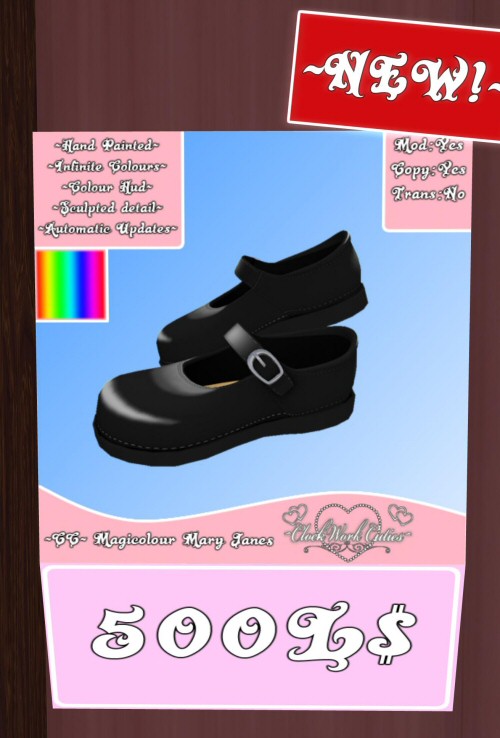 And, here’s the slick part.  She included a touch of magic thanks to some newly available tricks that can be done now that invisiprims aren’t needed.  You can see they’re a bit shiny.  The shine never goes away.  You can set the bloody things to any colour and the shine and shade will look just bloody fine! XD

So, like, if you go and buy them… You’re gonna have another thing that’s my stuff in your stuff! (^_^)

I’m still doing a “Guest DJ” thing so that people can run their place as ‘Bring Your Own Stream’ if anyone decides to mob while the regular crowd is away. =^-^=

… Now, if I can only put some time into building my market… And the home for Brown… I should DJ more… GAH!!! DX

I'm a Second Life avatar with my own cookie jar! (^_^)y
View all posts by Imnotgoing Sideways →
This entry was posted in Uncategorized and tagged (^_^), Blablablabla, does this thong make my butt look fat?, Don't worry I'm from the internet!, Freebies, Friends, Friendship, I wan to mayk da seks!, Immy make go boom!, Say my name, Scripting, Second Life, Volunteering. Bookmark the permalink.